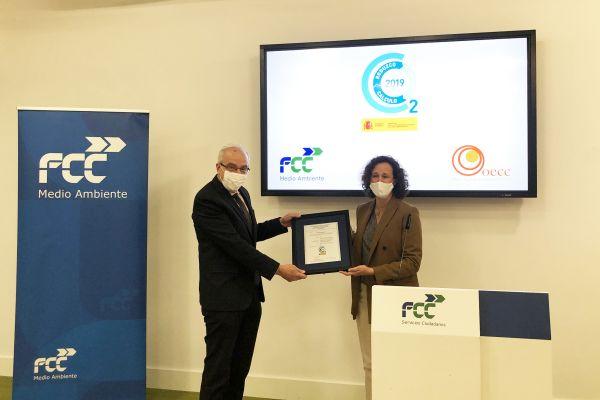 The Spanish Office for Climate Change (OECC) has awarded FCC Medio Ambiente with the certificate of the Reduzco seal, in a ceremony held at the corporate headquarters of the company in Las Tablas (Madrid). The event was chaired by Valvanera Ulargui, General Director of the Spanish Office for Climate Change, and Jordi Payet, General Director of FCC Medio Ambiente.

The 'Calculo-Reduzco' seal is awarded to organisations that calculate and register their Carbon Footprint for a minimum of four years, have a plan for reducing their emissions and make effective their reduction commitment.

During the event, Valvanera Ulargui emphasized that we must continue to work with companies and administrations on climate change, that we must react now and that we cannot leave this problem to future generations. Finally, she congratulated FCC Medio Ambiente for obtaining the seal and gave special thanks to the company for its work in these difficult times.

Jordi Payet highlighted that we need to think about the future, not just the present, and mentioned the company's long-term commitment to sustainability for the 2050 horizon. To conclude, he thanked the Director General of the OECC for her presence at this event.

For the second time this year, FCC Medio Ambiente has been awarded the Reduzco seal by the Spanish Office for Climate Change as part of the process for registering carbon footprints, compensation and CO2 absorption projects established by the Ministry for Ecological Transition and the Demographic Challenge (MITECO). This recognition is added to the preceding Calculo (Calculate) distinction, which has been endorsing FCC Medio Ambiente’s registration process since 2013.

Over the last few years, FCC Medio Ambiente has been working on the definition and validation of tools for the efficient management of the use of energy resources as well as on calculation methodologies, such as the environmental and carbon footprints and intensity indicators. The quantification of the Carbon Footprint is carried out through our own tool, the VISION Platform, which allows the identification of emissions according to the contract, type of activity, installation and process used.

The reduction of CO2 emissions has been achieved thanks to:

In 2019, FCC Medio Ambiente has already exceeded the 5% reduction target it had set in its emissions reduction plan for the 2016-2022 period presented to the OECC. As part of its new Sustainability Strategy for the 2050 horizon, the company is currently reconsidering new short and long-term emissions targets in line with the Spanish Long-Term Decarbonisation Strategy (ELP2050), which has just been approved by the government and which will set the path to achieving climate neutrality by 2050.