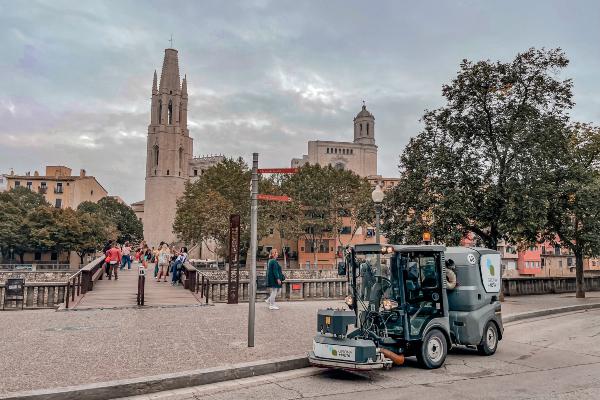 Council of Girona, city where FCC Medio Ambiente has been present uninterruptedly since 1987, has awarded the contract for street cleansing, urban waste collection and household recycling centres of the city to the joint venture Sanejament Girona, led by FCC Medio Ambiente. The order book value amounts to almost €153 million for the next eight years.

The entire fleet of the contract will have Zero Emission or ECO environmental labels, with over 50% electric and the rest powered by compressed natural gas (CNG), it will also be guaranteed that the energy supply will come from renewable energy sources, both for the central machinery depot and for the street cleansing ancillary work centres. This demonstrates the City Council's commitment to the fight against climate change and to the sustainability of its municipal services.

One of the singularities of this contract is the implementation in 70% of the city of areas with closed smart containers, each consisting of two containers (one multi-fraction container for packaging, paper, glass and residual waste, and another one for the organic fraction) plus a small container for nappies and sanitary towels, thus extending the pilot test that began in 2019. Due to its pioneering nature, this type of system has been named the "Girona Model" in Catalonia. The total workforce assigned to the contract amounts to 165 people, with plans to incorporate 50 new workers with a variable part-time percentage.

To serve the more than 100,000 inhabitants and collect around 37,000 tonnes of waste per year in the municipality, the contract boasts close to 50 waste collection teams. The city's commitment to continuous improvement is visible in the implementation of three different collection models: door-to-door, through closed containers in smart container areas, and through mobile platforms for the Barri Vell (old town). Thanks to the implementation of these three models, Girona received the "Escoba de Oro" (Golden Broom, in English) award from ATEGRUS in 2022. The smart containers are equipped with electronic locking and level sensors and are associated to dynamic collection routes depending on how full they are. It should be noted that all waste will be weighed at the time of collection regardless of the model applied.

The street cleansing service, which covers approximately 375 kilometres of streets and 2.8 million square meters, has around 60 workers and more than 40 vehicles. A work plan has been designed to adjust the intensity of cleansing to the level of cleanliness requirements on the street. The number of cleaning zones in the city will be increased which leads to reducing the current size of the operatives’ cleaning area. Cleansing services will be provided seven days a week in the busiest areas of the city and street washing-down will be extended to the whole city.

The household recycling centre service will be staffed by four workers and a weighing machine will be added to ensure that the municipal waste ordinances are applied more rigorously. Likewise, the number of mobile recycling centres will be increased with a service from Monday to Friday, covering the 30 neighbourhoods of the city, and environmental educators will be incorporated in each of the different recycling centres, whether permanent or mobile.

For optimal technological management of the services, the VISION platform, developed exclusively by FCC Medio Ambiente, will be furtherly implemented. This platform enables the control, monitoring and optimisation of work and makes possible real-time interaction with residents' requests, already introduced in the city's services. It will also be linked to other external platforms for specific services.

It is worth highlighting the hiring of environmental specialists for the communication and awareness office and recycling centres, and the joint venture’s active participation in the awareness-raising campaigns promoted by the City Council.

Social sustainability, not just environmental, is very relevant in this contract, as the concerted bulky items collection services have been subcontracted to the special employment centre Tècniques i Recuperacions del Gironès SL (TIRGI). In addition, the hiring of people from vulnerable groups with difficulty of getting jobs has been enhanced through the existing City Council’s responsible contracting procedure, reaching 5% of the total payroll; furthermore three working places have been reserved for women that are victims of gender-based violence.