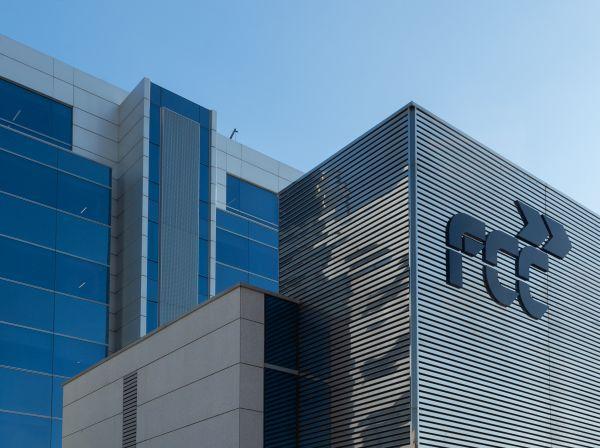 The FCC Group's revenues in the first quarter of 2022 stood at €1,671.8 million, up 10.2% compared to the same period in 2021. This growth is due to a strong performance in all business areas, especially the environment and real estate areas.

In the first three months of the year, the Group's gross operating profit (Ebitda) increased by 9.4% to €278.3 million.

FCC recorded profit attributed to the parent company of €85.1 million in the first quarter of 2022.

The Group's income backlog closed the first quarter of this year at €35,809.6 million, with a notable increase of 18.6%, which is mainly due an increase in contracting in the integral water cycle business area, followed by the construction and environment areas.

At the end of the first quarter net worth came in at €4,601.5 million, thanks to a substantial increase in the consolidated result of €113.6 million.

As at 30 March, net financial debt stood at €3,627.7 million, up 12.5% compared to the end of 2021. The main factor behind this increase is the takeover of the company that owns and operates the infrastructure for the integral water cycle in the capital of Georgia, together with other planned investments in the utilities area.

Renewal last March of the contract for street cleaning, waste collection, renovation and operation of the light packaging classification plant in the city of Salamanca, where we have been present since 1975. The contract backlog amounts to €231.6 million for the next 12 years, starting in October 2022. For its part, the Badajoz City Council has renewed its confidence in FCC Environment with the extension of the contract for street cleaning and waste collection for the next eight years and a backlog of €83 million. Also noteworthy is the launch of the urban waste collection and street cleaning service in Coslada (Madrid), with a duration of five years and a backlog of €25 million.

In March, the joint venture in which FCC Medio Ambiente holds a 29% interest was awarded the contract for the management of the waste complex on the island of Tenerife, for an attributable amount of €107.7 million and with a contract term of 15 years, extendable for a further four years.

In the United Kingdom, the backlog of recycling reception and sorting centres was expanded to include a further nine centres in the district of Buckinghamshire, subject to a contract term of five years, extendable for a further five years, serving a population of over half a million inhabitants.

In March, FCC Medio Ambiente obtained public support to develop a research and development project for a new heavy urban service vehicle fitted with hybrid battery and hydrogen-powered fuel cell technology (H2TRUCK), which has an eligible expenditure of over 5.5 million euros. This project qualifies for part of the funding awarded by the Centre for the Development of Industrial Technology (CDTI), supported by the Ministry of Science and Innovation, within the wider Recovery, Transformation and Resilience Plan for Spain financed by the European Union.

In February, the consortium led by Aqualia (45%) and comprising other international and Saudi groups was awarded the public tender for the management, operation and maintenance (MOM) contract for the integrated water cycle facilities in the southern regions of Assir, Jazan, Baha and Najran in Saudi Arabia. The South Cluster, whose water services will be managed by the consortium for a term of seven years, brings together four provinces and is home to a population of more than five million people in an area spanning more than 200,000 km2. The revenue backlog associated with this contract exceeds 60 million euros.

Considerable progress was made during the quarter in integrating the operations of GGU (Georgia), after paying the amount needed to assume control of the company on 2 February. As a result, FCC Group has acquired the ownership and operation of the country's leading integrated water cycle company. Its activity is carried out on the basis of a RAB (regulated asset base) system typically used in the regulated utilities sectors, which guarantees the recovery of investment and the cost of operations with an adequate return very similar to the return earned by the facilities that the Water area owns and operates in the Czech Republic.

Aqualia leads two consortia (Zeppelin and Eclosion) aimed at developing alternative technologies to electrolysis to enable the generation of green hydrogen (obtained from renewable energy sources) by revalorising wastewater and obtaining the product from sewage sludge; a project in which FCC Medio Ambiente is also involved. Both projects qualify for the public funding awarded by the Centre for the Development of Industrial Technology (CDTI), supported by the Ministry of Science and Innovation, within the wider Recovery, Transformation and Resilience Plan for Spain financed by the European Union.

FCC Construcción (35%), in consortium with Italian company Webuild (35%) and Korean company SK ecoplant (30%), has been awarded the design and construction of the Sotra Link project in Norway. It project involves the construction of the RV 555 Sotrasambandet motorway, which will link the island of Sotra in the province of Hordaland with the city of Bergen. Sotra Link is part of the Sotra Connection PPP project awarded by the Norwegian Public Roads Administration (NPRA). It is the largest road infrastructure contract in Norway's history and features an overall budget of around 1.23 billion euros, which will be implemented through a public-private partnership model.

In March, the consortium in which FCC Construcción has a 50% shareholding was awarded a construction project for a commuter line in Toronto. The contract includes the design, construction, operation and maintenance of a commuter rail network in the metropolitan area of Canada's largest city. The project has a total budget of more than 4 billion euros, though notably the award and contract performance phase will be progressive based on the agreement reached between the parties.

Last February, an amendment to the construction contract for the Tren Maya was signed in Mexico to adjust the performance period and add a further 250 million euros to the value of the contract.

In Spain, the award of the new Puertollano Hospital for €96 million euros is worthy of mention. The hospital will have 50,000 m2 dedicated to health care and a further 30,000 square metres of parking.

The parent of this division, Grupo Cementos Portland Valderrivas (GCPV), has initiated an environmental collaboration project with the Saint-Gobain PAM España group, leader in the production and marketing of ductile iron piping. The project aims to achieve zero non-recyclable waste, following the Europe 2020 roadmap defined by the European Union, by recovering the cement sludge generated during the production process at the Saint-Gobain PAM facility located in Santander, and then converting it into energy to power the furnaces of one of the nearby GCPV factories (Mataporquera in Cantabria).

On 23 March, the Group's real estate holding company, FCC Inmobiliaria, launched a non-hostile takeover bid targeting 24% of the share capital of Metrovacesa, S.A., offering €7.80 per share as consideration. This amount implies a premium of more than 20% over the closing price of the Metrovacesa share on the day prior to the announcement of the bid.

The maximum total amount payable would be €283.9 million assuming the entire target percentage of the offer, which was submitted for clearance by the regulator on 25 April, is achieved.