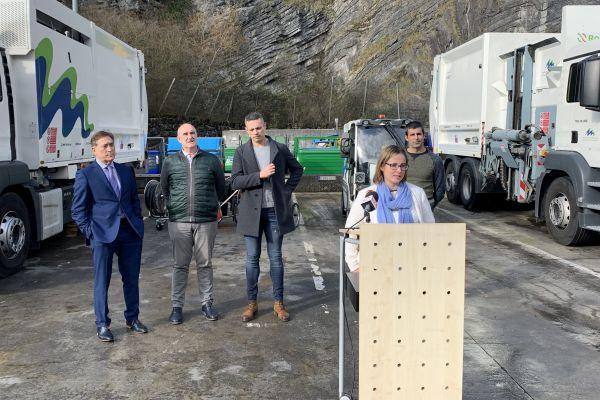 FCC Medio Ambiente (the Spanish brand for FCC Environment) and Txingudi Services have presented the new contract for urban waste collection and street cleaning services of Txingudi’s municipal association, formed by the municipalities of Hondarribia and Irún. The contract, which entered into force on 1st of February, has a term of five years and the value exceeds 42 million euro. FCC has been delivering services for both towns since 1996.

The presentation of the service took place at the facilities of the community, chaired by the first deputy mayor of Hondarribia, Juan Mari Altuna and attended by the manager of Txingudi’s municipal association, Leire Zubitur and the delegate councillor for public street, urban discipline and housing, Jon Ugarte. On behalf of FCC Medio Ambiente, the director of Guipúzcoa-Navarra delegation, Carmelo Aguas, attended the event.

The company will have a total workforce of more than 132 employees to carry out the services, and at least 10% of contracts will be for disadvantaged groups and another 10% for women.

To serve the nearly 80,000 inhabitants and collect around 25 million tons per year between residential and industrial urban waste, the company will have 31 vehicles, including seven side-loading units, five of which have been renewed, and nine rear-loading and industrial vehicles. Also, four new industrial lorries will be acquired.

The new contract involve a higher frequency on the collection of organic matter, packaging and paper and a lower frequency on residual waste. This responds to the increase in the recycling rate that has been consistent every year, thanks to the commitment of neighbours. Currently, the recycling rate stands at 53.3%, already very close to the 55% European target set for 2025. Meanwhile, for large generators, the packaging and organic material service will doubled.

Different actions will be implemented such as information campaigns, periodic analysis of the levels of containerisation and review of non-compliance of services to increase the percentage of selective collection.

With regards to the street cleaning service, 21 vehicles and specialized machinery will be available for the realization of different tasks, and 19 sweeping and washing carts, specifically designed for Txingudi, will be acquired. In this service, clean technologies prevail, such as the investment in an electric mechanical sweeper and four hybrid-electric Liquefied Petroleum Gas (LPG) ancillary vehicles.

Since the new Environmental Complex in Guipúzcoa (which is at phase II) has been put into use, there has been a transformation of the collection service, as the vehicles will unload directly at the environmental compound and it will not be necessary to use the existing Civic Recycling Centre as a transfer station.

One of the main novelties is the implementation of the integral management of the services through VISION, digital management platform that has been developed by FCC Medio Ambiente, which allows to respond to the current requirements from the client and be prepared for future challenges. In turn, an app for quality inspections and a web viewer will be developed in order to allow the client to check the areas and frequencies of street cleaning, and the level of cleaning.

Measures have also been included to control and reduce water and energy consumption both in the street cleaning service and at the internal vehicle cleaning services. Also, it will be installed a system for producing electricity through solar energy on the roof of the building assigned for the service and the replacement of the exterior lighting with LED lighting , both at the central depot and at the Civic Recycling Centres, as well as installing ignition control systems. The campaigns and talks of dissemination for schools and the citizenship survey to measure the quality of the service complete the list of new features of this contract.