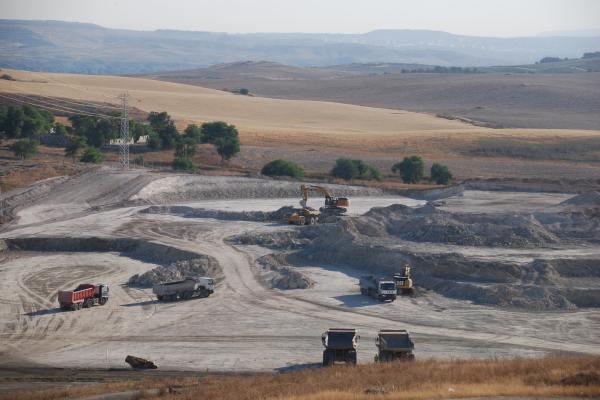 Due to the forthcoming expiry of the useful life of the landfill for Mancomunidad del Sur (Southern Municipalities Association), located between the towns of Pinto, Getafe and San Martín de la Vega, this association of municipalities called for tenders for the design and expansion works of Phase IV, including the capping and degassing of Phase III cell and the enlargement of the leachate treatment capacity, as well as the associated leachate pond.

This contract was awarded to a joint venture between FCC Medio Ambiente and FCC Construcción, which is currently carrying out the corresponding works at a good pace and foresees its completion in April 2023.

The main objective of the project is the creation of a new cell, known as Cell 8, with an area of more than 11 hectares and along which almost 2.5 million m³ of earth will be moved, with a forecast of more than 10,000 m³ moved per day.

This earth will be reused both in the adaptation of support platforms for future facilities planned by Mancomunidad del Sur, as well as in the capping of the existing cell and in the operation of the landfill itself, creating a synergy between the work and the needs of the facility, which is managed by FCC Medio Ambiente.

FCC Medio Ambiente has been operating the Pinto landfill since October 2015 and manages the packaging waste sorting plant on the same location. It carries out, whether directly or indirectly through its 4 transfer stations, the reception and disposal of waste from 71 municipalities in the Region of Madrid that make up the association, with a served population of nearly 1.9 million inhabitants.

In 2020 this facility received 755,323 tonnes of waste, with an average of 2,063 tonnes and almost 350 transits per day. These data confirm it as one of the largest disposal sites in Spain, a key essential service in situations such as the general confinement of the population or the adversities following the Filomena storm.

The FCC Group's Environmental Services area has been working for cities for 110 years. It currently serves over 66 million people in 5,000 municipalities around the world, and has nearly 700 waste management facilities, including 200 environmental compounds, which annually manage 23.6 million tonnes of waste as a resource, including 11 waste-to-energy projects with a capacity of 3.2 million tonnes per year and 360 MW of non-fossil electricity.