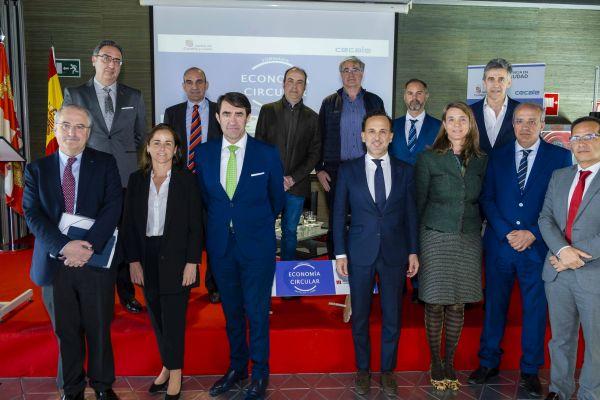 FCC Medio Ambiente (the Spanish brand for FCC Environment) has participated in the Conference on Circular Economy organized by the Club of Excellence in Sustainability in collaboration with the Junta de Castilla y León, which has taken place at the headquarters of Educational Environmental Proposals (PRAE) in Valladolid.

The Conference has brought together numerous political and business personalities, including the Minister of Development and Environment of the Junta de Castilla y León, Juan Carlos Suárez-Quiñones, and the Director of the European Commission Office in Spain, Francisco Fonseca. The General Secretary of the Club of Excellence in Sustainability, Juan Alfaro, among others, also attended the event.

The Councillor of Development and Environment of Castilla y León, Juan Carlos Suárez-Quiñones, has been in charge of opening the session where he stressed that “the circular economy is an obligation of the entire society and a new business and employment opportunity for companies”.

On behalf of FCC Medio Ambiente, the head of Waste Treatment in Castilla y León, Javier Vázquez de Prada, took part in the session of good business practices, where he highlighted that the company is committed to the transformation of society to the circular economy model and in the achievement of the Sustainable Development Goals. At the same time, he emphasized that they support local clients and institutions and use innovation as a lever to reach the recycling and landfill deviation rates set at the European Union´s circular economy package, through recycling and waste treatment projects, such as LANDFILL BIOFUEL, METHAMORPHOSIS, PLASMIX and 4Film, all of them framed in the European LIFE program to promote innovation. These projects investigate technologies and procedures to increase the recovery of energy contained in waste and the reuse of plastics.

The General Director of Quality and Environmental Sustainability of the Junta de Castilla y León, Rubén Rodriguez Lucas, has been in charge of closing the event and summarizing the highlights of the day.

FCC Medio Ambiente has focused its actions towards biofuel crops in landfills as a starting point for reuse, recycle  and developing green energies, in addition to promoting sustainable mobility and zero emissions thanks to the use of electric and hybrid vehicles for urban waste collection.