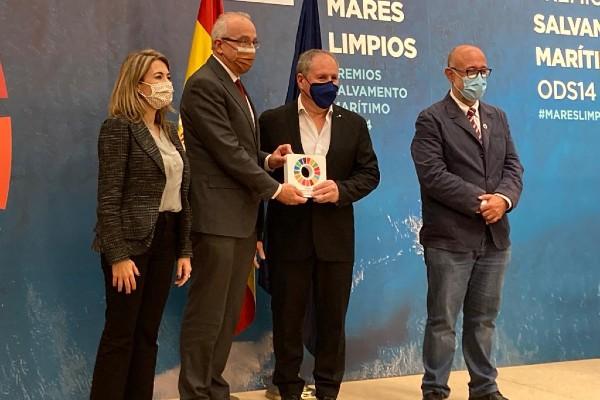 FCC Medio Ambiente has received an accolade in the 2021 Maritime Rescue Awards in the category of Greatest Contribution to SDG 14 With Respect to the Conservation of Our Seas for the project "Solid waste retention combs in sewage network spillway systems". The award ceremony took place on the evening of 16th December in the Assembly Hall of the Ministry of Transport, Mobility and Urban Agenda in Madrid. Minister Raquel Sánchez presented the award to Jordi Payet, CEO of FCC Medio Ambiente, and Paulino Romero, Head of Inspection and Area on the Sewerage Service at Barcelona.

This award is given to those individuals, public administrations, companies or organisations that have developed actions, projects and other initiatives promoting SDG 14 "Conserve and sustainably use the oceans, seas and marine resources for sustainable development". The criteria considered for the assessment take into account the degree of contribution to SDG 14, the scope of the project, the innovative nature, the results achieved, and the duration of the initiative.

The award-winning project aims to reduce the amount of bulky waste before it ends up in the sea. These retention combs, which have two hook lines that act in different phases, make it possible to retain this solid waste during heavy rainfall. Once the meteorological phenomenon has passed, they are collected by manual means with cleaning teams.

The initiative was implemented since 2018 with the placement of the awarded devices in seven sewage outfalls into the sea in the city of Barcelona, and is expected to be extended to other cities in Spain in the near future.

Between 2018 and 2020, 420 m3 of waste weighing 628 tonnes were prevented from being dumped into the sea, figures that speak for themselves of the effectiveness of this system for retaining solids. All this waste would have ended up in the sea where it would have been lost without the possibility of being recovered, which would aggravate the already critical situation of the seabed and the harmful effect on the ecosystem.

The project is part of FCC Medio Ambiente’s 2050 Sustainability Horizon, a 30-year business development strategy with sustainability as the backbone. The award is a great boost to the company's innovative spirit and serves to reinforce the public's trust in sustainable alternatives for environmental conservation.