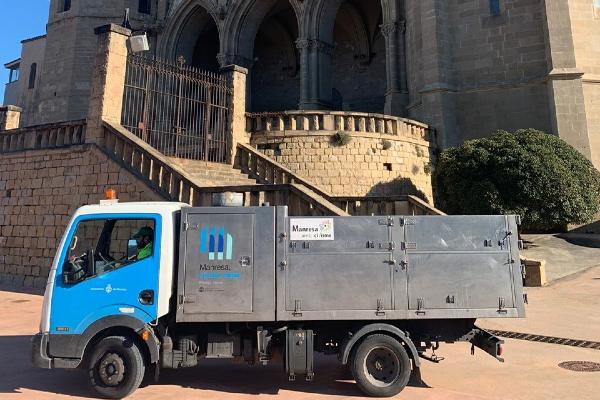 FCC Medio Ambiente will continue to provide solid urban waste collection and street cleansing services for the city of Manresa (Barcelona), where it has been present uninterruptedly since 1993. The new contract represents an order book value of €91.4 million for the next 10 years and will serve nearly 80,000 people.

The new contract includes significant improvements in the cleaning service and a major change in the waste collection and recycling model. It particularly highlights Manresa City Council's commitment to sustainability and a cleaner environment for the city, with significant reductions in CO2 emissions and noise pollution due to the new service machinery, a large proportion of which will be zero-emission electric. In addition, solar energy panels will be installed in the central depot. The new service will bring about a significant change in the habits of citizens, enabling them to recycle more and better, making an important quantitative and qualitative leap in Manresa's contribution to the fight against climate change and the development of a circular society.

Manresa currently holds the position of third Catalonian city with the best recycling rates with 47.79% in 2021. Even so, with the new contract, the City Council has taken on the challenge of complying with European obligations and exceeding the minimum of 55% recycling by 2025.

The most relevant new features of the service are the reorganisation of the waste collection areas, creating "ecological islands" with the whole five fractions (organic, packaging, cardboard, glass and residual waste), and the containerisation and collection systems are unified to the side-loading technology, except in those narrow streets of the old town where the rear load is kept. Side-loading containers will be locked for residual, packaging and organic fractions, where users can open them with a card or mobile device. Furthermore, door-to-door commercial collection will be implemented, also for the five fractions. In addition, the workforce has also been increased, from 84 to 145 people, considering full and part-time contracts.

To collect the more than 22.800 tonnes of waste of the different waste and recyclable fractions, the service will have a fleet of 23 vehicles, several of them electric. It should be noted that the collection of the five fractions is unified in a single contract, as previously cardboard, packaging and glass fractions were managed by a different operator. This new feature makes the management of the service more effective and will improve the handling of incidents in the collection areas and the quality control of the service.

The city´s cleansing service will have a completely renewed fleet of 31 vehicles, 80% of which will be electric, with four sweepers, 16 open-box vehicles and vacuums, among others. Sweeping frequencies will be increased, manual sweeping will be reinforced at weekends and on public holidays and there will be special plans to increase the cleaning for seasonal needs, such as leaf fall in autumn. In addition, a team will be appointed to clean litter bins and their surroundings.

Regarding new developments in innovation and Information and Communication Technologies (ICTs), the technical staff will be expanded with the creation of the position of data and digital platform manager. The comprehensive management of the services will be carried out with the reinforcement and implementation of new applications for the current digital platform, VISION, developed exclusively by FCC Medio Ambiente, which enables the control, monitoring and optimisation of works and real-time interaction with residents' requests.