The initiative plan driven by FCC's new shareholder structure, with the Carso Group as a focal point, has enabled the FCC Group to obtain a solid operational, structural and financial position over the last five years. 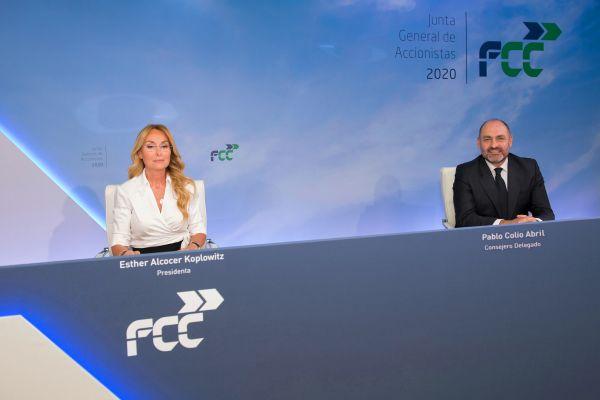 At its General Shareholders Meeting, FCC examined the results obtained in 2019 and approved all the items on the agenda, which included the financial statements, the management reports for 2019 and the distribution of a scrip dividend.

On this occasion, and due to the current circumstances caused by the COVID-19 pandemic, the General Shareholders Meeting was held remotely. This therefore complied with the measures imposed since the declaration of the state of alarm and following the recommendations of the National Securities Market Commission and those indicated by both the World Health Organisation and the relevant health authorities.

The Board was chaired by Esther Alcocer Koplowitz, chairwoman of FCC, and Pablo Colio Abril, CEO of the company. Both of them wanted to explicitly highlight the work carried out in this time of crisis by FCC professionals who have been at the forefront of essential services and who have worked in an exemplary fashion to fulfil the company's commitment to guarantee citizens waste collection and treatment services. This commitment also includes street cleaning, the comprehensive water cycle service and the management and maintenance of transport infrastructures, with all of these elements being critical to the proper functioning of cities and the well-being of people.

In her speech to the shareholders, Esther Alcocer Koplowitz, chairwoman of FCC, stressed that "FCC will continue to be a stable, durable project with a common spirit and a long-term vision, a company worth investing in".

Furthermore, referring to the 120th anniversary that the company will celebrate this year, the chairwoman also made reference to "a past that guarantees our present".

Then, before reporting on the results of 2019, the CEO of the FCC Group, Pablo Colio, highlighted the actions carried out in the last five years, a set of vital actions around three main axes: operational, structural and financial, which has led the FCC Group to a profitable pathway ever since. This initiative plan, driven by FCC's new shareholder structure, which since then has had the Carso Group as its focal point, has enabled the company to have a solid position in all aspects over the last five years.

In the operating area, FCC has managed to recover its position as a Group specialised in the management of environmental services, the management of the comprehensive water cycle and the development and management of infrastructures. This is in addition to improving risk management systems, increasing an ethical commitment in all projects and promoting synergies between business areas and the value of the Group's corporate brand, with the aim of increasing the profitability of exploitation operations and customer satisfaction.

In terms of structure, during these five years we have managed to strengthen profitability and operating cash flow thanks to the implementation of strict discipline in terms of cost control and the sharp reduction of structure and corporate costs in order to be more agile and competitive.

Finally, in the financial area, the Carso Group's leadership was essential for a combined process of strengthening the capital structure, with two capital increases, executed in December 2014 and March 2016, for a joint amount of 1,709 million euros, which served as the basis for an in-depth restructuring and the subsequent reduction of the company's debt.

Colio concluded his presentation with the following thoughts: "The set of actions carried out have made it possible to strengthen and completely revamp the FCC Group"; and he stressed that "as a result of these five years of work and effort, the company has been awarded many significant contracts in all its areas of activity".

In addition, FCC Group's net revenue in 2019 rose by 4.8% over the previous financial year with a total of 6,276.2 billion euros. This increase was reflected in all business areas, with the most dynamic performance recorded in Water with 6.4% and Cement with 10.8%. Revenues increased by 3.9% in the Construction area, and the Environment area recorded growth of 3.3%.

FCC Group's gross operating profit (Ebitda) at the end of 2019 reached 1,025.8 billion euros, representing an increase of 19.1%. This increase is based on higher revenues obtained in all of the FCC Group's business areas as well as on the increased and obtained operational efficiency.

After breaking down the company's figures, Colio mentioned the new projects and contracts obtained during 2019 by the different business areas of the FCC Group.

The chairwoman and CEO took advantage of this important event to thank the Board of Directors, the management team, and all FCC employees for their hard work during 2019, noting that their dedication contributed to FCC's sound earnings, and to the growth and development of the FCC Group.

After the speeches by the chairman and the CEO, shareholders approved the 2019 financial statements, the company's earnings and all the items on the agenda.