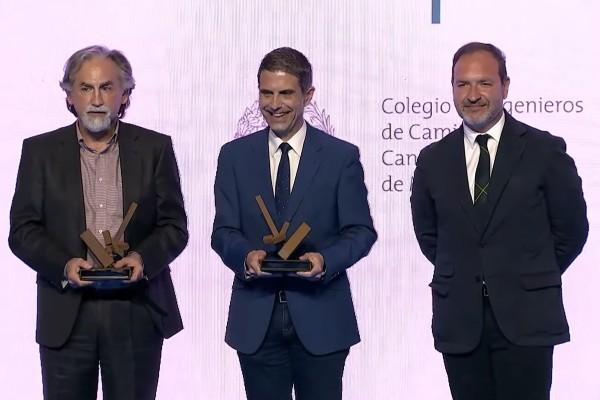 The ‘La Campiña’ comprehensive Resource Recovery Centre (RRC) owned and promoted by the Eastern Municipalities Association of the Region of Madrid, and developed and operated by ECOMESA, 100% subsidiary of FCC Medio Ambiente, has received the award for Best Municipal Work at the Caminos 2021 Awards of the Madrid Branch of the Civil Engineers' Association. The award ceremony took place on 18th February at the Real Casa de Correos, headquarters of the Madrid Region’s government. Javier Rodríguez Palacios, president of the Eastern Municipalities Association and mayor of Alcalá de Henares, and Luis Sanz Jiménez, director of the compound and coordinator of the project for ECOMESA, received the award from Mariano Fuentes, delegate councillor of the Urban Development Area of the Madrid City Council.

This recognition, awarded within the framework of the 14th edition of the Caminos Madrid Awards, rewards sustainability and the development of projects that contribute to the improvement of the quality of life and respect for the environment in the municipal level.

Ecoparque Mancomunidad del Este SA, ECOMESA, was the company in charge of the design, development, construction and commissioning of the compound, and is responsible for the operation of the facilities. For its part, FCC Construcción has executed the civil works project for the centre in record time. Both FCC Construcción and FCC Medio Ambiente belong to the FCC Group, and this project is a clear example of the business and customer service synergies generated between the different areas of activity of the Group, which have allowed the project to be optimally adapted to the needs of the Eastern Municipalities Association.

The RRC 'La Campiña', located in the municipality of Loeches, in the east of the Region of Madrid, spreads over 60 hectares of land and serves over 735,000 inhabitants in the 31 municipalities that make up the Eastern Municipalities Association. The commissioning of the compound, on 1st April 2021, will prevent the annual emission of 90,000 tonnes of CO2, giving a definitive boost to the circular economy model in the Region of Madrid and meeting the demanding recycling and landfill diversion targets from the European Union.

The facilities have been designed to manage five independent treatment lines: residual waste , packaging, commercial, bulky and vegetable waste fractions, with an initial nominal processing capacity of 270,000 tonnes per year. The compound incorporates the latest technology in waste recovery, such as the use of automated lines and more than 25 optical separators and IA robots to replace manual triage. This makes it the most innovative and cutting-edge waste recovery facility in Europe. It is also the first comprehensive RRC to be built in the Madrid region and pioneer in fully complying with the Regional Waste Management Plan.

It also has an air collection and regulation system that runs through the facilities, subject to controls that ensure its optimum quality, which leads to five independent heather-based biofilters with a capacity of 600,000 Nm3/h. This system ensures that bad odours are avoided in the facility and that only clean air is emitted into the atmosphere. In order to optimise the energy consumption, a photovoltaic system has been implemented which will cover a significant part of the electrical needs required by the Loeches RRC.